Watch Out For (Data) Traffic!

A Comparison of AMI Network Options

“Watch out for traffic!” How many times did we hear that growing up? Did anyone imagine that it would also be sound advice in the digital world as well? When local distribution companies in the utility sector are sizing up vendors for their Advanced Metering Infrastructure (AMI) needs, network traffic and congestion are critical thoughts to keep in mind.

All networks handle data traffic comparable to how the interstate highways manage vehicle traffic. Picture each highway as a route for data traffic and the city center as the “head-end” system where all data is processed and stored. AMI networks use individual radio frequencies as highways for communicating data in the field back to the head-end for processing. Just like taking a few different routes to the office in the city center, there are a few different methods of getting data across a network. The three most common network types for AMI are Cellular, Mesh, and Point-to-MultiPoint.

AMI has become increasingly more popular for utilities of all sizes as the need for remote asset monitoring increases. Sometimes the change is customer driven at a local level with demands for more transparency, but in the regulated utility sector, change is most often a result of state and federal mandates. One example is the PIPES Act of 2020 which was signed into law on December 27th, 2020. A part of Section 206 states: “… the Secretary shall promulgate regulations to require that each operator of a distribution system assesses and upgrades, as appropriate, each district regulator station of the operator to ensure that…the gas pressure of a low-pressure distribution system is monitored, particularly at or near the location of critical pressure-control…” The most important word in the statement is “monitored.” Monitoring implies the need for near real-time data that can be accessed at any time, encouraging proactivity versus reactivity. Some AMI vendors offer solutions to enable a utility to do just that. An AMI network is relatively simple in its nature and is comprised of collectors, endpoints, and the head-end system. At a high level - regardless of whether it’s Cellular, Mesh, or Point-to-Multipoint - all three network types operate in a similar manner. A head-end system is the hardware and software that receives the stream of data brought back to the utility by an AMI network. Endpoints, which are also known as electronic radio transmitters, are battery powered and deployed on many types of distribution assets in the system. Historically, these devices were only configured for metrology assets, but some AMI network vendors are finding ways to incorporate SCADA-like monitoring and control in critical distribution system functions including pressure regulation, like mentioned above. Collectors, which are also identified as base stations, receive data via RF channels from the endpoints and perform the backhaul to the head-end server for processing. Knowing the three methodologies of how that data is being sent over an AMI network is fundamental in choosing the appropriate vendor. 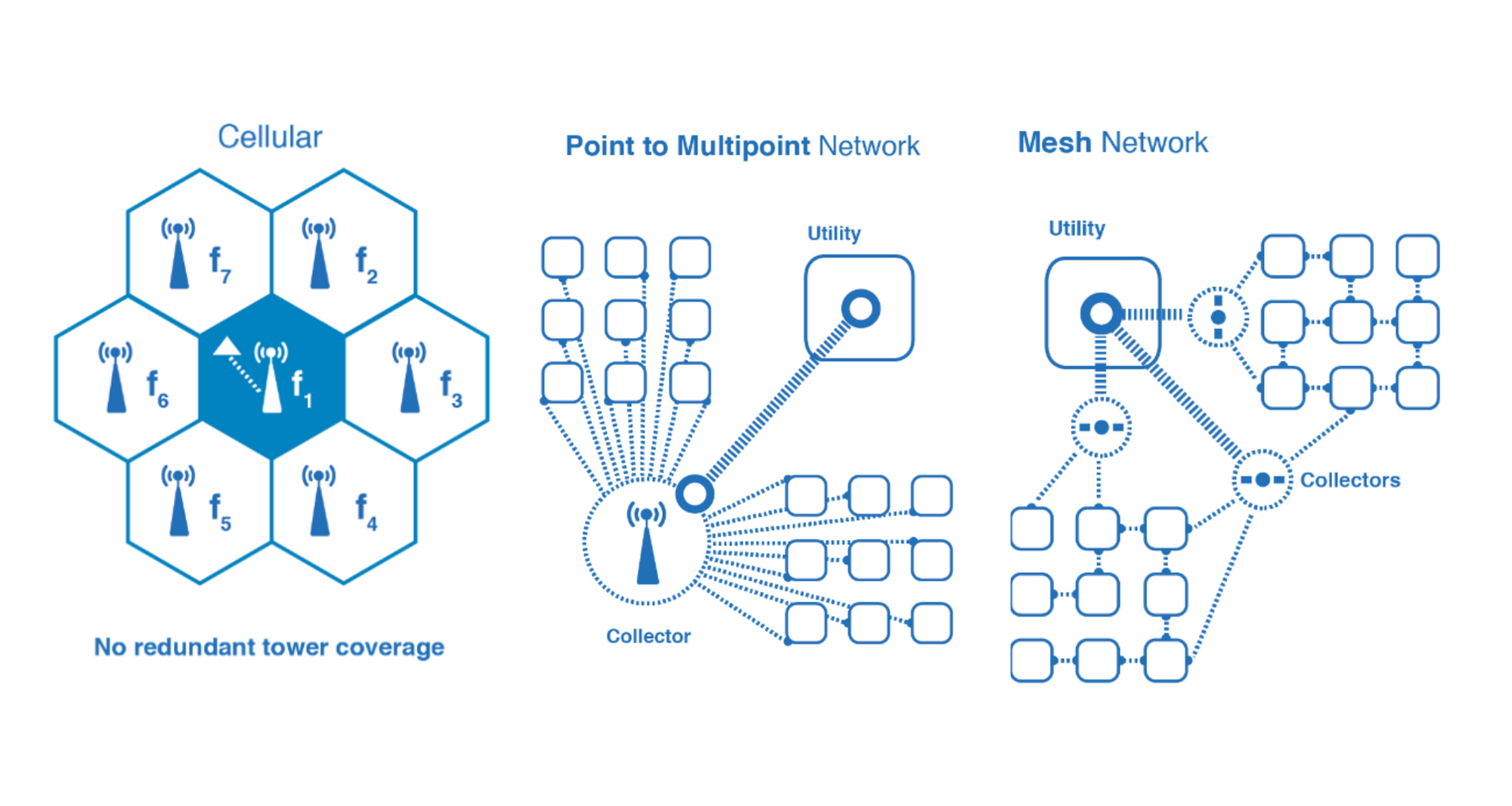 The Buzz Around Cellular

Cellular AMI networks operate on the same radio frequencies that the general public uses to send text messages, make phone calls, and surf the web. Each endpoint in the utility’s population has an integrated SIM card, much like your cell phone, that connects it to the network. Meter data collected by the device is sent OTA, or over-the-air, to the closest compatible cell tower. All data is then routed to the appropriate server to process and format for display. Cellular AMI solutions are applicable in some scenarios because they can significantly reduce the cost of a physical RF communication network. Cellular AMI operates without the need of utility-owned collectors, instead using nearby cell towers within transmission range. Almost everyone pays a cell phone bill each month. Included with that bill is the realization that cellular data is getting more expensive. Generally, AMI networks are designed to provide large amounts of actionable data that can be used in the utility’s decision-making processes surrounding demand planning, system integrity, customer engagement, and more. Cellular data, and transmission of that information can become cost-prohibitive for utilities, depending on the volume collected. You can think of a Cellular network as public transportation, a potentially viable solution in serviceable areas. But the key word is serviceable – what if there is no cell service from a major carrier? What if the newer 4G and 5G devices are no longer supported in 10 years? In the natural gas industry, we are familiar with dead zones because our pipeline assets are often in very rural areas. We are also known for maintaining equipment for much longer than 10 years. Shouldn’t a utility network operate with the same principles and strategy as the utility? Your AMI decision should consider trends in technology and opt for a solution that hedges against change outside of your control.

Mesh vs. Point-to-Multipoint: How do I Choose?

Another solution may be to build your own network. While this may seem a daunting task at first glance, advances in technology and technology services have made the implementation process a more manageable project for all utilities, regardless of size or personnel count. The 2 types of “buildable” networks that are most common for utility applications are Mesh and Point-to-Multipoint. Both options enable a utility to have a dedicated network for their operations, but how they manage the transmission of that data is as different as night and day.

All Mesh networks use unlicensed radio frequency (RF) spectrum for their communications channel, meaning they operate on the same channels available to the public. Specifically, the industrial, scientific, and medical (ISM) frequency band that Mesh networks utilize is shared with a myriad of devices, such as cell phones, baby monitors, garage door openers, and Wi-Fi modems. Each radio endpoint in a Mesh network operates as a sender and receiver of data from neighboring devices. You can think of a Mesh network delivering data to the head end system in the form of downtown New York with hundreds of varying paths leading to the city center. In a utility-based example, we use endpoints on gas meters acting as sender and receiver for a neighboring meter’s consumption data. Each endpoint is tasked with sending all data collected from the previous meter radio and its own to the nearest collector for transmission to the head-end. If a collector is out of range, it defers the transmission to another nearby meter radio. Mesh networks are constantly forced to modify or repair their communication paths to the head-end due to radio frequency interference. I am reminded of my father saying he had to adjust “bunny ears” on a TV when he was growing up! While this opens a multitude of different paths for data to travel, is the fastest point from A to B not a straight line? Your critical utility data alarms should be prioritized and sent in the fastest manner possible. And alarms that alert utility professionals of pressure fluctuations in a low-pressure distribution system should not have to compete on the same RF spectrums as the funny meme your mother just sent you. 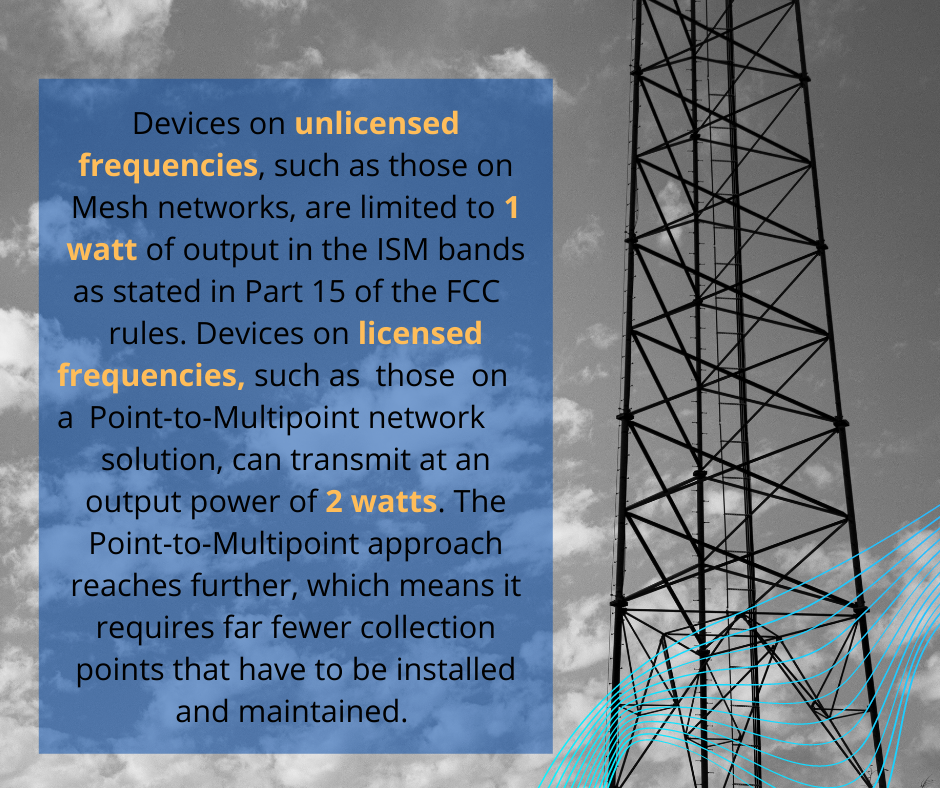 Weaknesses in Mesh network architecture were identified and mitigated with the Point-to-Multipoint approach. In a Point-to-Multipoint network, utilities use federally licensed and protected frequency spectrum for communications. No one else but the utility is permitted to operate on that frequency, and violators can face federal prosecution with fines amounting to tens of thousands of dollars. Staying true to the analogy, a Point-to-Multipoint network can be compared to a personal High Occupancy Vehicle (HOV) lane on a highly trafficked interstate to the city center. With interference mitigated and manipulable frequency channels, a whole host of features can be realized. Probably the most easily recognizable is increased signal range. Devices on unlicensed frequencies, such as those on Mesh networks, are limited to 1 watt of output in the ISM bands as stated in Part 15 of the FCC rules. Devices on licensed frequencies, such as those on a Point-to Multipoint network solution, can transmit at an output power of 2 watts – double the output power of mesh networks who are limited by regulatory thresholds. Because of this, licensed spectrum signals consistently reach further distances than unlicensed Mesh signals. Why is that important? Remember the collectors whose responsibility is to backhaul received data to the head-end system. With decreased range, more collectors are required. Collectors are often the most expensive piece of the AMI puzzle and require maintenance over the life of the system. Backhaul requires a steady, reliable network connection and that upload expense can add up quickly. Licensed frequencies offer the benefit of being manipulable into different channels. On a licensed frequency, alarm channels that identify potentially hazardous events can be given priority. This results in little to no latency, ensuring timely notification to emergency and utility personnel.

A Closer Look at the Options 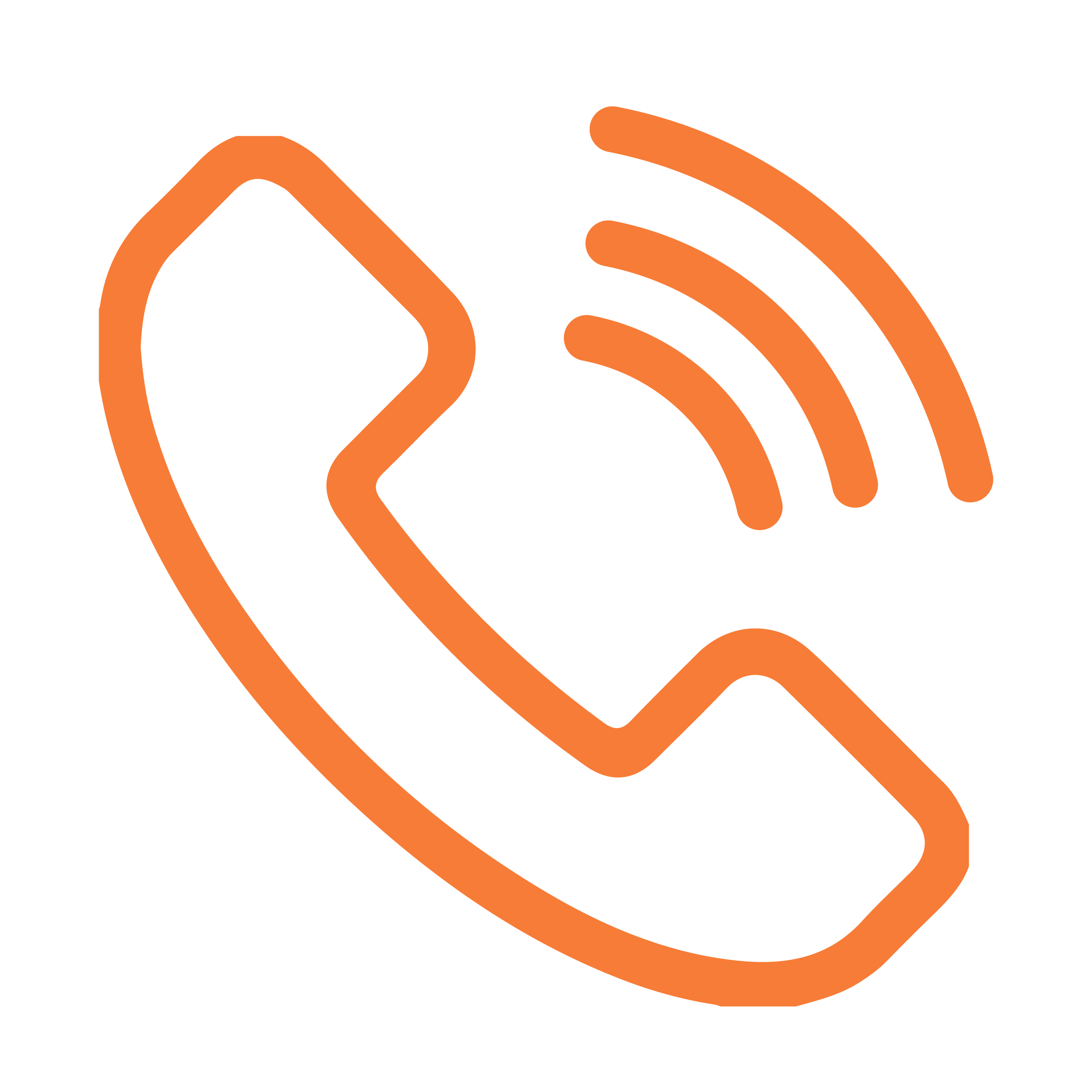 Operates on the same radio frequencies used for texts and phone calls.
Endpoints have an integrated SIM card that connects it to the network.
Can be affected by dead zones in rural areas.
Technology is always changing, so your network will need updated to be compatible. 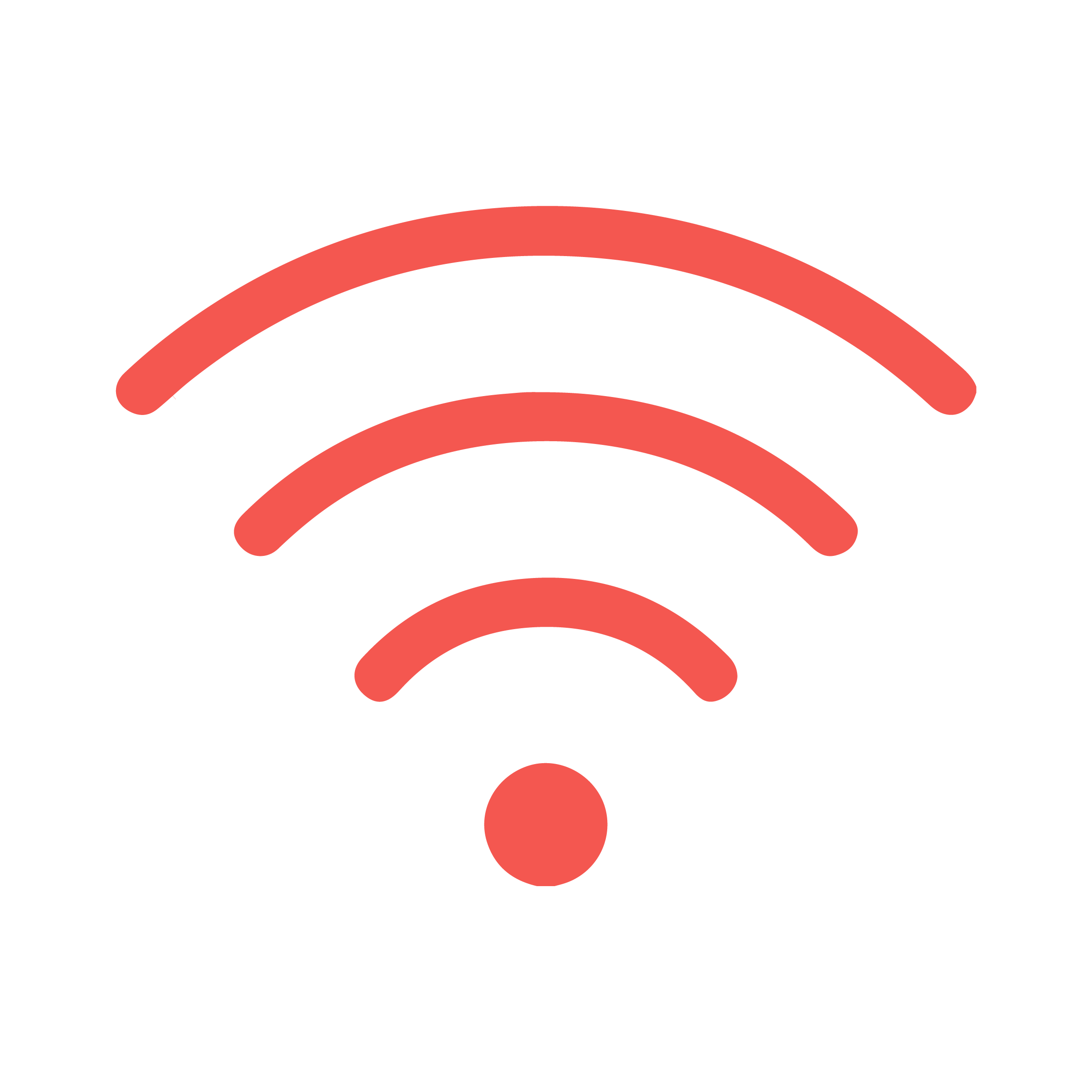 Uses a federally licensed and protected frequency spectrum that's dedicated to just the utility.
With interference mitigated and manipulable frequency channels, a whole host of features can be realized, including increased signal range.
Decreases the number of collectors needed. 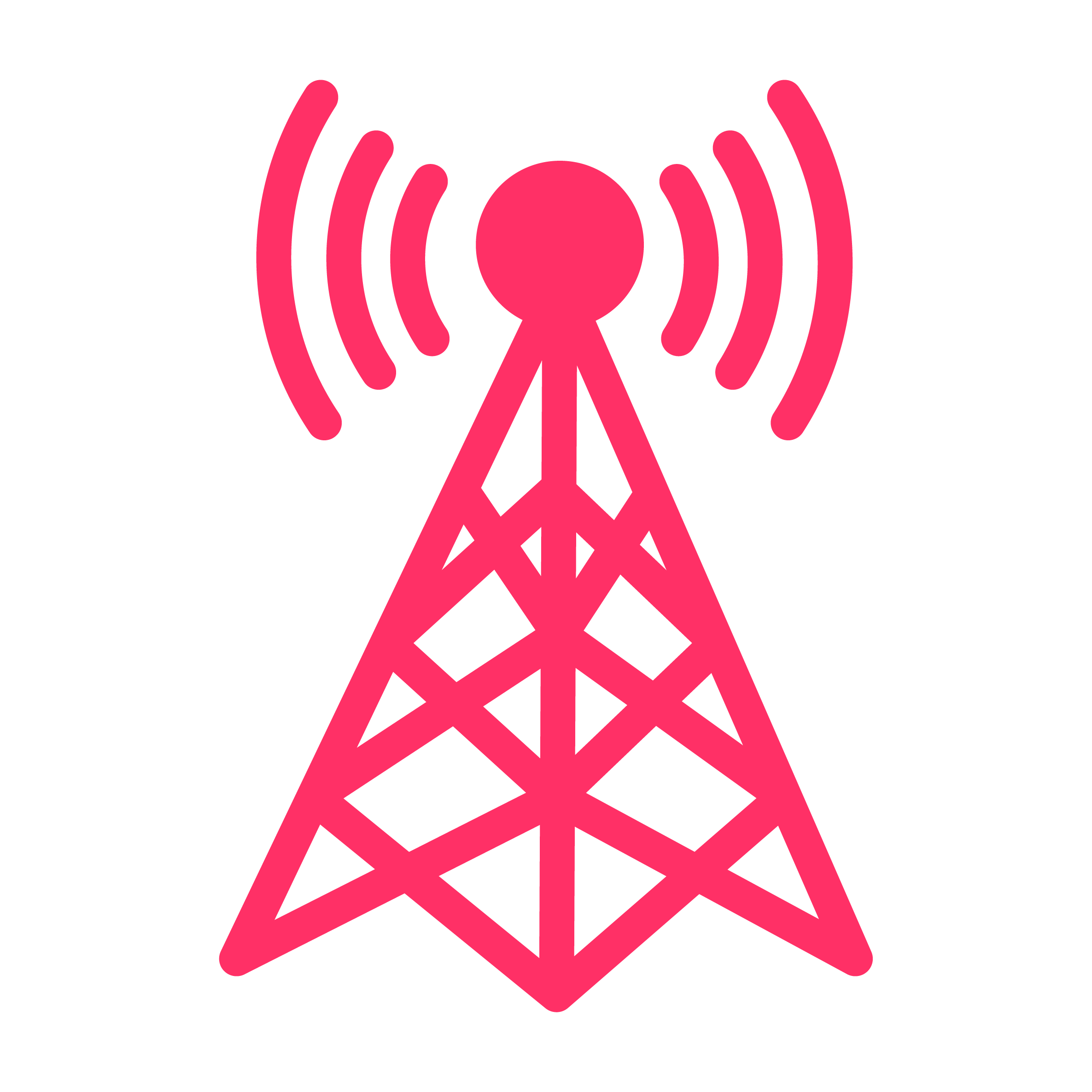 Uses unlicensed radio spectrums.
Each endpoint is tasked with sending all data collected from the previous meter radio and its own to the nearest collector for transmission to the head-end.
Regularly need to modify or repair the communication paths to the head-end to radio frequency interference.

The three most common types of AMI network architecture each have different methodologies for data transmission. Cellular AMI solutions function without the requirement of utility-owned collectors but are only viable in predetermined coverage areas and may be susceptible to forced migrations. Mesh AMI networks operate on the publicly used ISM band and endpoints can either send or receive data from neighboring devices. This allows for multiple paths to the head-end but increases the likelihood of a failed communication. Point-to-MultiPoint AMI solutions use licensed RF spectrum, allowing for higher wattage output that correlates with increased range. With increased range, fewer base stations are needed. Though initial costs of a deploying a Mesh network are typically less than that of a Point-to-Multipoint solution, both network types require collector maintenance.  The attractive initial cost savings recognized by Mesh networks quickly diminish and are replaced by ongoing maintenance costs. A highway interstate project in the mountains of West Virginia is dramatically different from one in the plains of Illinois and may require different construction techniques. The same can be said for an AMI network buildout. One type of AMI network does not reign supreme; it is up to the utility to determine the viability of each for their unique application.
Having options is a good thing, and we’re happy to help you understand what those options are. If you’re not sure where to start, that’s okay! Our experienced team is here to help you find the solution that works best for you. And remember: When determining the appropriate network for your AMI system, be sure to heed the wise words of childhood and watch out for (data) traffic!

If you’re looking for more information on a product, please contact us for a custom quote.

Need guidance on sizing or selecting a product? Our Technical Sales team is ready to help.

How Our Site Works

To unlock an automatic 5% off all orders and additional features, customers should login or create an account.